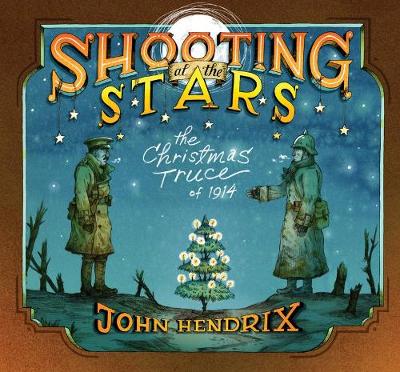 Shooting at the stars : the Christmas truce of 1914

Shooting at the Stars is the moving story of a young British soldier on the front lines during World War I who experiences an unforgettable Christmas Eve. In a letter home to his mother, he describes how, despite fierce fighting earlier from both sides, Allied and German soldiers ceased firing and came together on the battlefield to celebrate the holiday. They sang carols, exchanged gifts, and even lit Christmas trees. But as the holiday came to a close, they returned to their separate trenches to await orders for the war to begin again.John Hendrix wonderfully brings this story to life, interweaving fact and fiction along with his detailed illustrations and hand-lettered text. His story celebrates the humanity and kindness that can persist even during the darkest periods of our history. Back matter includes a glossary, additional information about World War I and the Christmas Truce and its aftermath, and an archival photograph taken during the Truce. Also available by John Hendrix: Miracle ManPraise for Shooting at the StarsSTARRED REVIEWS "Few titles at this level convey the futility of World War I as well as this one does. A first choice." --School Library Journal, starred review "Timed with the centenary of World War I but a lesson for always, Hendrix's tale pulls young readers close and shows the human side of war." --Kirkus Reviews, starred review

STARRED REVIEW
"Hendrix crafts an intimate fictional account of the event...powerful images."-- (09/15/2014)
STARRED REVIEW
"The acrylic and gouache illustrations tell a tale of their own. Not only is this an impressive Christmas story, but it shows the humanity of warring soldiers."-- (01/01/2015)
STARRED REVIEW
"Timed with the centenary of World War I but a lesson for always, Hendrix's tale pulls young readers close and shows the human side of war."--Kirkus Reviews (08/15/2014)