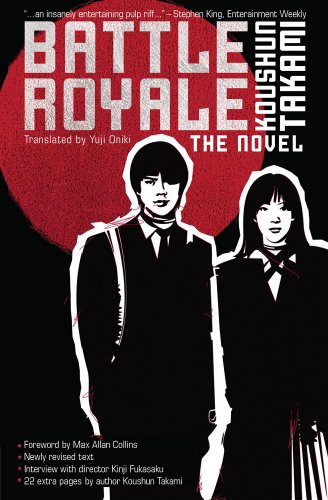 In an alternative future Japan, junior high students are forced to fight to the death! L to R (Western Style). Koushun Takami's notorious high-octane thriller is based on an irresistible premise: a class of junior high school students is taken to a deserted island where, as part of a ruthless authoritarian program, they are provided arms and forced to kill one another until only one survivor is left standing. Criticized as violent exploitation when first published in Japan--where it then proceeded to become a runaway bestseller--Battle Royale is a Lord of the Fliesfor the 21st century, a potent allegory of what it means to be young and (barely) alive in a dog-eat-dog world. Made into a controversial hit movie of the same name, Battle Royale is already a contemporary Japanese pulp classic, now available for the first time in the English language. A group of high school students are taken to small isolated island and forced to fight each other until only one remains alive! If they break the rules a special collar blows their heads off. Koushun Takami's brutal, high-octane thriller is told in breathless. blow-by-blow fashion. Battle Royale is a contemporary Japanese pulp classic now available for the first time in English.

After The Hunger Games