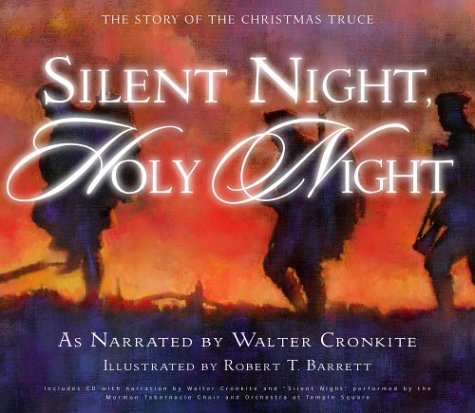 Silent Night, Holy Night: The Story of the Christmas Truce

December 1914 was grim for the thousands of soldiers who had dug into the frozen trenches on either side of Flanders Field. What lay between them in the early months of the First Great War was a field of sorrow - No Man's Land - littered with barbed wire and decaying corpses. This sober background is the setting for this very powerful and poignant true story previously known as The Christmas Truce. For two days, their guns were silent as men who had shot at each other only hours before experienced a miracle, as they laid down their weapons to exchange gifts and special holiday traditions. This common bond of Christmas was shared in a spontaneous celebration that culminated in the singing of the beloved carol Silent Night. Almost a century later this amazing story is retold by Walter Cronkite with the Mormon Tabernacle Choir and Orchestra at Temple Square in this beautiful Christmas gift book, Beautifully illustrated by Robert T. Barrett. A CD with Walter Cronkite's incomparable narration of the story and the Choir's stirring rendition of Silent Night is included with this must-have Christmas keepsake. This book and CD will become a Christmas tradition for families across the country. The book contains Cronkite's narration and so families can listen to the CD as they follow along in the book. This story of peace on earth is as applicable today as it was then.